1. CASARES CASTLE: at the top of steep and narrow streets, where it contemplates the Serranía.

Simply spectacular! It is located in the highest part of town and is a magnificent viewpoint to

enjoy the views of the coast, the Bay of Algeciras and the Serrania de Ronda.

Raised on a massif of limestone, this Arab fortress still preserved some towers, parts of the wal

ls and arches of the suburband the Villa. Inside you’ll find entinhabitants of Casares.

2. BIRTHPLACE OF BLAS INFANTE: History of Andalusia and a must see in Casares! It presents the

life and work of the father of the Andalusian homeland, Blas Infante. The house it has a

permanent exhibition with parts of the work of this illustrious casareño. Three distinct parts in

which shows the life and thought of the artist.

3. CHURCH OF THE INCARNATION: Also called “Church of el Llano”. It is a temple located in the

Llano de la Fuente. It has a single nave, a bell tower of s.XVI and a rear patio with garden

surrounded by tiny sourses. It has recently been restored and in front of the plaza you can sit

and make a stop at few benches with Gaudí-inspired décor.

4. HEDIONDA BATHS: They are one of the historical hallmarks of Casares. It´s a thermal

swimming-pool with sulphurous water and mud, on the outskirts of the village. A place where

you can breathe tranquility! According to the legend, the devil was defeated by Santiago and

after the fight, the water has this characteristic sulfuric smell. Also Julio Cesar tried a herpes in

this beautiful spot and later ordered the construction of the baths which are preserved today.

5. SOURCE OF CARLOS III: A beautiful building of neoclassical and built in the 18th century. It

served to channel water from the spring of the port of the vines to the Centre of the village. It is

6. NATURAL PARK OF CRESTELLINA: Relax and enjoy the view! A protected area with an

of Sierra Crestellina. Rocks of limestone origin and grayish colors that distinguish it from other

Malagueñas lands getaway to enjoy stunning views and savor the cuisine of Casares. 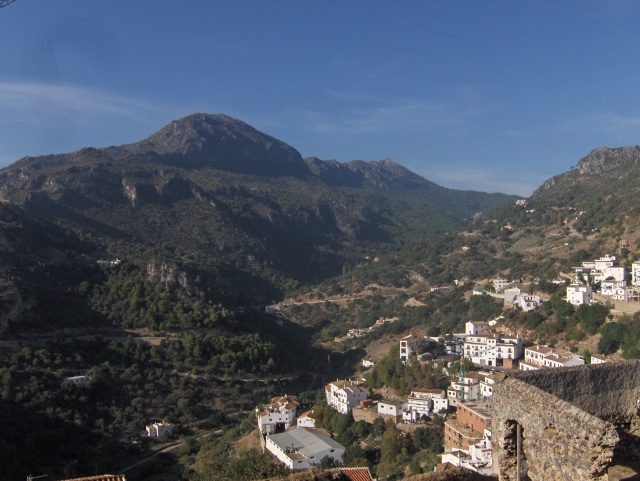 7. CHAPEL OF SAN SEBASTIAN: Located in the centre of the village and built in the 17th century.

Our lady of the Rosary del Campo, patron saint of Casares. People from Casares ”Casareños”

have a great attachment to this chapel, which is located in the Plaza of Spain. The day of his

pilgrimage, always the last Saturday of May, the virgin is carried up to the Hermitage of the

Virgin of the Rosario del campo.

8. PLAYA ANCHA “wide beach”: Close to the Marina of Duquesa and the fishing port of

Sabinillas. Sand open to the sea between the Arroyo la Parrilla and the river of Manilva. 1,300

meters from beautiful and alegant beach to take a bath and begin to enjoy the summer.

9. Torre del salto de la Mora: Alongside the river Manilva this spectacular tower was originally Islamic and reformed in the 16th century. Built for the defense of the litoral and also knowns as Torrel de la Sal. Today day is no longer possible to vist inside although surrounding bench there to rest and see a beautiful view.

Shall we go for tapas? Located in the center of town. A place to enjoy traditional tapas, in an

environment of the most familiar. It has a wide selection of tapas and toast, made with local

products. A tasty proposal to recharge batteries after this visit by the municipality.

You cannot pass up the chance to try the soup or rabbit so typical in Casares. We want to

recommend other restaurants where you can also enjoy the Casares gastronomy, as the

Andalusian cuisine, heritage of Romans, Arabs and Jews. A rich variety of flavors that make it a

unique cuisine in the world.

2 thoughts on “10 Things to see and do in Casares”