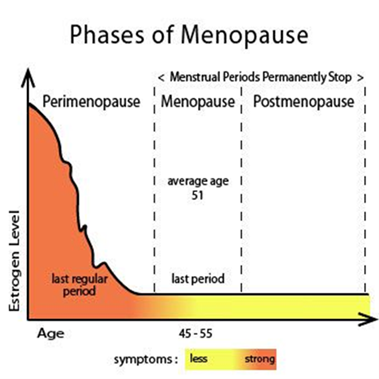 Our bodies gradually slow down as we get older. As a result, women make less and less of the two sex hormones, oestrogen and progesterone, and many suffer unpleasant or distressing symptoms such as: hot flushes, night sweats, loss of libido, headaches and mood changes. This process takes years and can be characterised into three stages – which can start at any time around forty but can be earlier or much later – perimenopause, menopause and post-menopause. 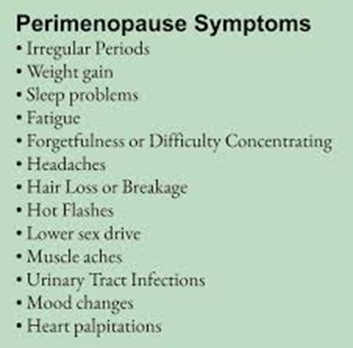 Your GP has a fairly effective remedy – a pill or patch containing drugs to replace the missing hormones – a treatment known as HRT (hormone replacement therapy). This may help but are you getting the right sort of hormones? The HRT your doctor supplies can raise your risk of both breast cancer and heart disease. The risk is small – about seven extra cases per 10,000 for heart disease and eight for breast cancer. You may think that’s a small price to pay for banishing night sweats and getting your sex drive back but, for some it is still a worry while others find HRT just doesn’t agree with them. It can cause bloating, swollen ankles, headaches, breast tenderness and bleeding. So, what else can you do?

Official NHS advice, if you are suffering the side-effects of conventional HRT, is to try antidepressants or complementary treatments such as herbs, yoga and aromatherapy. It also says there’s no  evidence that they work. There is another option, however, known as bioidentical hormones. Like HRT, this involves taking a hormone replacement but, the chemistry is slightly different. They are identical to the ones your body is used to and, as such, have fewer side effects than HRT.

Many people don’t realise that the hormones supplied in HRT aren’t exactly the same as the ones made by your body. You can see the difference very clearly from this diagram of a molecule of a natural oestrogen and a molecule of the non-identical oestrogen Premarin, which is used in regular HRT. Premarin comes from the urine of pregnant mares. So why is the version of HRT your doctor supplies not identical? Surely it’s sensible to replace like with like? The problem the drug companies originally faced was that progesterone couldn’t be put in a pill because it is destroyed in the stomach. The solution was to alter the molecule slightly creating a non-identical hormone drug called progestin. This had two big benefits. It could pass safely through the stomach and, because it was different to natural progesterone, it could be patented. You can’t patent something found in nature; without a patent a drug won’t make large profits. For a long time only a few clinicians, who were interested in natural medicine, thought it was worth prescribing the identical versions of oestrogen and progesterone on the grounds they would be safer and more effective. These included the late Dr John Lee in America and Dr Shirley Bond in the UK.

This all changed in 2003 when the results of the Women’s Health Initiative (WHI) trial came out. This big, randomised, controlled trial found that non-identical HRT slightly raised the risk of heart disease and breast cancer. Prescriptions of HRT dropped and there was a sudden surge of interest in bio-identicals. So, are they safer and more effective? This is where the controversy starts. Doctors who specialise in treating menopausal symptoms with the non-identical hormones used in regular HRT say there is no evidence they are. They also warn they could be dangerous. Although many studies have been done on bio-identical hormones, they are officially not drugs and so don’t need the expensive, large-scale trials used to test drugs. Trials often don’t pick up drug risks anyway. HRT had been licenced on the basis of favourable trial results for years before the WHI study.

The research that has been done certainly suggests that bioidenticals are safer. For instance, long running research has found that women taking progesterone plus natural oestrogen had no raised risk of heart disease or cancer. This was the conclusion of a big French study of 80,000 post-menopausal women. Those who took only oestrogen had a 29% rise in their risk of breast cancer. But for those on progesterone as well the cancer risk disappeared. Combining oestrogen with various nonidentical progestins, however, pushed up the risk by as much as 69%. The HRT your doctor supplies can raise your risk of both breast cancer and heart disease. The official bodies also object to the personal treatment patients receive in bio-identical clinics. The HRT establishment believes that the ‘one-size-fits-all’ approach of regular HRT is adequate. But it would be surprising if the same amount benefited everyone. So, every patient getting bio-identical treatment has regular tests to find how much of the different hormones they have in their blood already and then gets a personalised prescription to achieve and maintain a healthy level if necessary. Patients very much appreciate this focus on their individual needs.

Each prescription is made in a lab known as a compounding pharmacy. The critics say these labs can get the doses wrong or sell contaminated batches of hormones. But compounding facilities are often used in hospitals and are providing a range of drugs for doctors all the time. They are tightly regulated and overseen by the General Pharmaceutical Council or the MHRA in the UK. Many women report they feel much better on bio-identical hormones and recent American research estimated that between 30% and 60% of postmenopausal women getting hormone replacement are taking some form of bio-identical hormones.

These differ from synthetic hormones used in traditional HRT. Premarin and oestradiol are both prescription medications used in hormone therapy used to replace depleted estrogen levels and to help alleviate symptoms. The HRT usually prescribed by GPs uses synthetic hormones called Premarin, which are derived from horse urine, whereas BHRT uses oestradiol, hormones which are derived from the diosgenin in Mexican yams.

Synthetic hormones have a chemical structure that may be similar to but are not exactly the same as the hormones produced by the body. Bioidentical hormones are structurally identical to the hormones your own body produces. Even a slight difference in chemical structure of a compound can lead to profoundly different effects on the body due to the inaccurate fit between the natural hormone receptor and the synthetic compound.

Below you can see the difference between the chemical structure of estrogen, premarin and oestradiol. 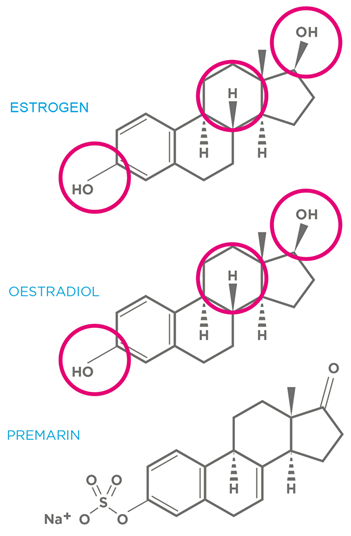 What are the Benefits of bio-identical hormones?

Bioidentical hormones can be very beneficial for patients who are experiencing a hormone imbalance and are looking for treatment. We can use BHRT to treat any hormone-related condition, but we’ve detailed the most common conditions we see in patients :

BHRT can also be used as an alternative for those who have tried synthetic hormone treatments, such as HRT, but experienced unwanted effects as a result.

The clinical data available certainly suggests that bioidenticals are safer. For example, long running research which studied 80,000 post-menopausal women found that taking progesterone plus natural estrogen had no raised risk of heart disease or cancer. HRT had been licenced on the basis of favourable trial results for years before this WHI study.

Those who took only estrogen had a 29% rise in their risk of breast cancer. But for those on progesterone as well the cancer risk disappeared. Combining estrogen with various non- identical progestins, however, pushed up the risk by as much as 69%.

In our experience, many women prefer bioidentical hormones as they feel much better on them and don’t experience the side effects associated with traditional HRT.

As part of ongoing treatment reviews, we require blood tests, mammograms and pelvic ultrasounds so we can keep a close eye on the effectiveness of treatment and any potential side effects.

Another concern that some have about the safety of bioidentical hormones relates to the dosage. Critics of BHRT say these labs can get the doses wrong or sell contaminated batches of hormones. But each patient’s bioidentical hormones must be prescribed by a doctor or registered nurse prescriber and is made in a lab known as a compounding pharmacy. These compounding facilities are often used by hospitals and are providing a range of drugs for doctors all the time. They are tightly regulated and overseen by the General Pharmaceutical Council and the Medicines and Healthcare products Regulatory Agency (MHRA) in the UK.

How is BHRT used?

Before BHRT can be prescribed, you’ll be seen by your Marion Gluck Clinic accredited doctor or advanced nurse practitioner (ANP), who will carry out a comprehensive consultation to gather all necessary information about your symptoms, medical history, and any test results. Any treatment will be tailored to your individual needs as one size does not fit all. BHRT medication is usually prescribed as a lozenge or cream, formulated to your personal requirements. Any treatment plan with us will include regular follow ups and ongoing monitoring to help achieve optimum results and detect any changes in your hormone balance needing addressed.

In the case of the bioidentical hormones we use, the word ‘natural’ is used to refer to the structure of the hormone molecules, which are produced from natural plant sources (Mexican yams). The chemical structure is 100% identical to the naturally occurring hormones produced by your body’s own glands.

The bioidentical hormones we use are compounded by our specialist Pharmacy, to seamlessly deliver your bespoke hormone prescriptions, which can come in different formats, from creams, to lozenges.

How long will I have to be on BHRT for?

Many women are concerned they will need to be on BHRT for the rest of their life. As the hormone therapy we provide is completely tailored to you, the duration of any treatment will be specific to you and your needs. Some will experience symptoms for just a few months whilst others may experience symptoms for years. We will provide treatment for as long as you have the symptoms and as long as it continues to improve your wellbeing. 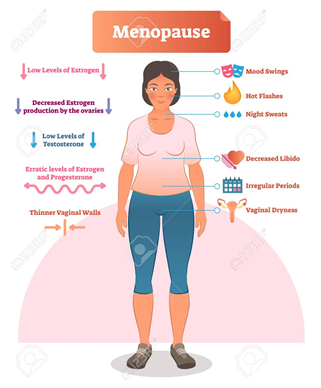 The symptoms of peri-menopause, menopause and post-menopause are created by changes in hormone production as fertility wanes and your body no longer requires the menstruation cycle which is a finely tuned process with peaks and troughs in reproductive hormones, designed to accommodate fertilisation and pregnancy on a monthly basis. 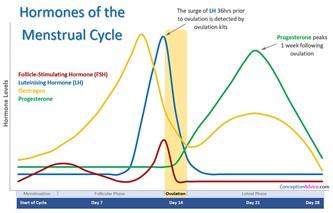 If you would like to discuss symptoms and the possibility of trying bio-identical hormone therapy, then get in touch with Dr Margo here. She has been trained by the Marian Gluck Institute and is a recommended, accredited BHRT Practitioner. Consultations can be face to face, over the phone or on Zoom/Skype so, location is not an issue.

You do not need to suffer difficult symptoms any longer – expert help is at hand. Contact Margo@DrMargoLivingston.com for advice or, to book a consultation.