NEW YEAR’S RESOLUTION – A little work of fiction that many of us will relate to after the holiday excesses! 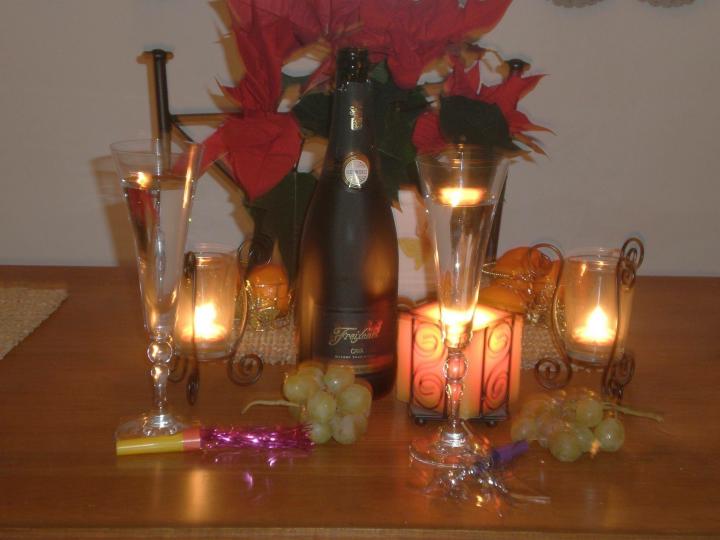 It has been three days since chocolate has passed my lips. Three long, miserable days. It was the sight of my hips that decided it as I battled with the zip of my jeans. I cursed my addiction as I managed to yank it closed, and viewed with horror the roll of fat lying on top of the waistband like an overblown muffin.
‘That’s it. No more chocolate.’ I muttered to my reflection in the mirror.
Of course I had to finish the remains of the Belgium chocolate truffles that my mother had given me for Christmas. It would be sacrilege not too. I savoured each one slowly, letting the bitter, dark cocoa that dusted the outside dissolve in my mouth before the velvety, rich layer of chocolate melted to release the molten deliciousness of the inside of each sinful morsel.
Too soon I had polished them off and I felt a mixture of relief and regret in throwing the box away. No more chocolate for me. Soon my jeans would be swimming on my hips as I dropped a dress size. But my self-righteousness was soon replaced by despair.
I was like one possessed by a force stronger than myself.
Did it get easier? No, it did not. Each day dawned and I was enveloped in misery. How could I get by without my best friend? For that is what chocolate had become. Any chocolate. I fantasised about walnut whips, coffee creams, chocolate covered Turkish delight, caramels in milk chocolate, mint creams encased in dark chocolate, white chocolate truffles, coconut covered chocolates, bitter black chocolate squares, rum and raisin, chocolate bursting in the mouth releasing liqueurs, strawberry fondants, cherries in bitter chocolate. I dreamed of chocolate. In other words, I was obsessed.
It’s not really my fault. My mother owned a sweet shop and I grew up inhaling the fragrance of her kitchen, where she toiled each evening over fresh batches of home made chocolates. The bitter-sweet fragrance of that kitchen was the air I breathed: vanilla, spices, Christmas, birthdays, celebrations, life. And when I’d had a bad day at school or fell and scraped my knee, the succour that she offered was always a chocolate placed into my mouth. It worked every time and soon the pain was forgotten as I gave in to the sweet temptations that were constantly on offer.
Theobroma cocao, the food of the gods. The Mayans made it over two thousand years ago with ground cocoa beans, chillies, cinnamon and just enough sugar to take away the bitterness. It was used in ceremonies to give courage before battle. They gave it to their sacrificial victims just before they ripped their hearts out. Such is the magic of chocolate.
Day four at work and Sharon, from the typing pool, brings a box of chocolates into the office. Sharon is a thin girl who belongs to one of those gyms where only the slim venture over the threshold. Sharon worships at the shrine of the body beautiful and chocolate is not a part of her diet. Sharon brings a plastic container of undressed salad to work each day for her lunch.
“Have one.” She places the open box on my desk and the familiar aroma is an aphrodisiac, pulling at my senses.
Try me. Taste me. They seem to chant as they glisten in their plastic tray.
“What are you doing with chocolate?” I quiz her accusingly.
“They were a present from my new boyfriend but –“
“I don’t eat chocolate.” I interrupt, willing her to remove them.
“But, I thought –“
“No, I don’t anymore. New Year’s Resolution.”
“Really?” Sharon looks at me with deep suspicion, as if I am lying.
I start to reason with myself. Just the one. One won’t harm. You can walk home instead of getting the bus.
Then I look at her snake hips and remember the sight of mine in my too tight skirt.
“Yes, really. I find they give me a headache…” I trail off as I feel a guilty blush creep up my cheeks. I am a hopeless liar. I decide that I would have to go to confession, as lying was now added to my sin of greed.
“Well, if you insist.” And with that she whips them away and I breathe a sigh of relief.
“Well done.” A voice behind me whispers.
It’s Caroline, five foot two and weighing at around a hundred and fifty pounds.
“Did you have one?” I asked.
“No, I’ve given them up. New Year’s Resolution.” She replies, looking as dejected as I felt.
“Are you finding it hard?”
“Incredibly.” Replies my new soul mate.
“Tell you what.” I am struck with inspiration. “If we can get through this week, why don’t we treat each other to a meal out? Not pizza or anything but something healthy and delicious.”
Caroline smiles and we form a pact.
Six months later I have dropped two dress sizes and joined that snooty gym. Actually, I found it to be quite friendly once the terror of joining was surmounted. Sharon, Caroline and I go every evening after work and once a week we treat ourselves to a meal out.
Do I miss chocolate? Of course I do. But I don’t miss that layer of blubber that used to sit on top of my jeans like an overblown muffin.

Sue Cross has written two novels and numerous short stories. You can visit her on the website www.suecross.com